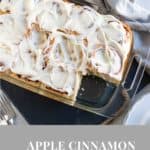 This buttery breakfast treat is a classic take on cinnamon rolls with the addition of slightly tart and sweet apples. To make the recipe less fussy, uncooked apples get added to the dough on top of the cinnamon-sugar mixture before being rolled up and cut into individual rolls. These are topped with a generous amount of tangy cream cheese frosting. You won't want to go back to your regular cinnamon roll recipe after trying these apple cinnamon rolls!

Well, the world is a different place than it was a short week or so ago. With everyone feeling uneasy, unprepared or just plain fearful of what is to come, I find myself trying to put a positive spin on my thoughts (something my husband reminds me I'm not always doing so well). While we can definitely hone in on the negative, the craziness of social media and the fear of the unknown, we can also try to find the good in these new times.

We've been enjoying as much of nature as the weather will allow us in Colorado. I've been checking in on friends and family more, some who I haven't talked to in a while to make sure they are ok and find out how they are coping. Daily Facetimes or phone calls with my parents in another state have been keeping us connected from afar. I've even tackled trying to set up Facetime for my 90 yr old grandma who is isolated from any and all visitors in her apartment in an assisted living facility.

It can be a scary world right now, and many people are suffering through unimaginable losses or huge inconveniences but hopefully, these days or weeks or months can give us the opportunity to slow down, reconnect with our loved ones, evaluate what is important in our lives and plan a new road ahead. We see everyday people stepping up to help others as much as they can and that is a reassuring and comforting sign of humanity's goodness.

With more time on most everyone's hands, it is a great time to tackle a baking project. While working with yeast may intimidate you, I've (hopefully) given a straightforward approach with a good amount of pictures along the way to show you how to achieve the best-tasting apple cinnamon rolls. For the apples, you can choose whatever apples you like best. I used Honeycrisp apples as I had them on hand and love their taste. Granny Smith apples would balance the sweetness of the frosting with the tartness of the apples.

How to proof your yeast and make the dough

To start this recipe, you will begin to "proof" your yeast which simply means that you are making sure the yeast is alive before combining it with the other ingredients. To do this, you'll warm some milk in the microwave or on the stove until it reads 100- 110 degrees. Then you'll add this warmed milk and 1 teaspoon of sugar to the bowl of a stand mixer and sprinkle the yeast over the top. You'll stir it into the milk and then let it stand for about 5 minutes until it is foamy at the top. This tells you that your yeast is good and you can proceed with the recipe. If for some reason (milk too hot, yeast old, etc) the yeast didn't foam then you would want to start over with new yeast. From here, the rest is really simple. You will mix in your eggs, vanilla, flour, sugar and salt to the yeast mixture and then let the mixer do the magic. Youll mix on low for about 5 minutes until the dough is smooth. Next, you'll add in the very room temperature butter and mix for another 4 minutes until the butter is incorporated. You'll grease another bowl with baking spray and then transfer the sticky and wet dough into the new bowl. Cover this bowl with plastic wrap and let rise in a warm place for an hour to an hour and a half until it's doubled in size.

How to assemble the cinnamon rolls

Once the dough has doubled in size, you will dump it out onto a lightly floured counter and roll it out to a 12 x 21 inch rectangle. Next, you'll spread the softened butter onto the dough, spreading all the way to the edges except for one long edge where you'll leave a ½ border. This will help the filling from not spilling out when you roll up the dough. You will combine the brown sugar and cinnamon and sprinkle this over the butter. I recommend pressing down on the cinnamon and sugar mixture using your fingers or a spatula to adhere it to the butter. Last, scatter the chopped apples over the top. Starting at the long edge without the border, roll the dough into a tight log, pressing the seam together at the end. Cut the roll into 12 even rolls. I like to cut once in the middle of the roll and then cut each of those halves in half. You'll then have 4 halves. Cut each into 3 rolls that are 1.5 inches thick. You'll place the rolls in a 9 x 13 pan coated with cooking spray and let them rise in a warm place for about an hour until they are puffy and mostly touching in the pan. Now you get to bake them, cool them slightly and slather them with a healthy dose of cream cheese frosting!

How to store the rolls

After baking, you'll want to cool your apple cinnamon rolls some before spreading on the frosting so it doesn't completely melt. If you aren't eating all of these in one sitting, they will keep for multiple days. You can keep them in an airtight container on the countertop for 2-3 days. If you plan to keep them longer than that, place the airtight container in the refrigerator for up to 6-7 days. They will start to dry out toward the end of this time frame but I found that placing them in the microwave for 20-30 seconds helped a lot! You can also freeze the rolls individually by wrapping them in plastic wrap and foil or wrapping the pan in plastic wrap and foil before freezing. You'll want to thaw those in the refrigerator overnight and then heat them up in the microwave before eating.

How can I make-ahead cinnamon rolls

These rolls can be made ahead at multiple steps in the process. The first place you could do this is after making the dough and letting it rise. Instead of rolling it out after the first rise, you could place the bowl of dough, tightly covered with plastic wrap, into the refrigerator overnight. Then proceed with rolling the dough, filling the dough, slicing into rolls and letting rise again the next day. The next way you could make these ahead is to put together the entire recipe through slicing the rolls and placing into a pan. Then, cover the pan tightly with plastic wrap and foil and freeze. When ready to bake them, remove from the freezer, defrost overnight and then allow to rise 1-2 hours before baking.

For more breakfast or brunch treats, check out these recipes: 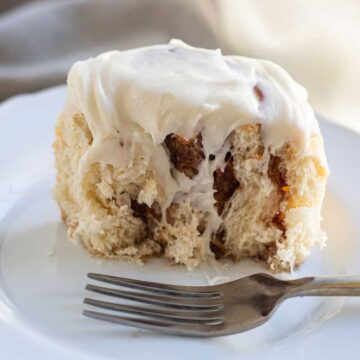