Babka has been having it's moment of glory the last few years and I'm finally jumping on the train! I conjured up this raspberry almond babka after recently having a delicious babka dessert at the New Orleans restaurant Shaya. Shaya was a James Beard Award Winner a couple years ago so if you are in the New Orleans area and have a hankering for some delicious Israeli food-think creamy hummus (fried chicken hummus anyone?!), piping hot pillowy pita bread, and crispy falafel-definitely- check it out. The dessert at Shaya involved a more traditional cinnamon-flavored babka with a streusel topping, caramel sauce and scoop of vanilla gelato. Yes, please. It was mouth-wateringly delicious and very rich.

Babka is by most accounts a Polish Jewish bread and means "grandmother" in Polish. It's a yeast dough similar to brioche and filled with a healthy dose of butter and various toppings. Chocolate (or nutella!) and cinnamon seem to be the more traditional flavors. This was my first attempt at making a babka but I knew I needed to try my hand at it after eating that amazing confection above.

I used to hate almond flavoring. I can remember being at weddings with my parents when I was younger and disliking the taste of the wedding cake. There was just something in the cake that put me off. Well, that something was almond extract. Then I grew up, traveled to New York City and was told I had to try an almond croissant. I was sold from there. My taste buds had a revolution and suddenly I was craving that almond flavor. Discovering almond paste at the grocery store made me dream of all the things I could flavor with it. My husband's taste buds still need a little refining because he DOES NOT like almond flavor at all. I'm happy to report that I slipped him a piece of this babka without telling him what was in it first and he happily declared it a winner.

I decided the flavors of almond and raspberry were a perfect match. I didn't want to put straight almond paste on the dough however so came up with a tasty and easy almond filling. Using a good quality store bought brand of raspberry jelly made my job even easier. Aint nobody got time for making homemade jam. At first glance, the recipe seems a bit intimidating. Despite the number of steps, I promise it's fairly straightforward!

How to make Raspberry Almond Babka

You begin by proofing the yeast, which is a fancy way of saying sprinkle the yeast over a warm liquid so that you can see it start to foam indicating that your yeast is in fact alive. If it doesn't foam after about 5 minutes, dump it out because either the yeast was bad or it was killed by liquid that was too hot. After that, you dump the rest of the dough ingredients into the stand mixer and basically let it do its thing until the dough comes together. You add a load of butter and then some more mixing and your dough is ready to start rising.

I made this dough 2 ways: one- letting it rise and then immediately rolling it out and filling it, and two- letting it rise and then refrigerating it overnight before rolling out. The overnight method did yield a bit easier dough to handle when rolling and cutting however both tasted equally good. I hate when I get excited to make a recipe only to discover that it has to rest overnight, so fear not, this can be done successfully either way! The most intimidating part of this recipe may be the shaping of the dough to get those signature babka swirls. I provided a few pictures below to help orient you to the process. It really isn't too difficult and makes quite the impressive presentation. Enjoy!

How to Shape Babka 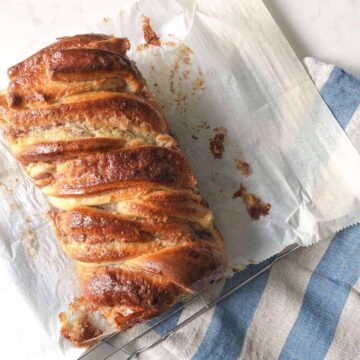 To Make the Dough

To Make the Sugar Syrup

To Make the Almond Filling

The babka can keep for about 3 days wrapped tightly in plastic wrap and foil or can be frozen for up to a month.
Keyword almond, almond paste, babka, jam, raspberry
Tried this recipe?Let us know how it was!
« I Started a Supper Club and You Should Too
Banana Pudding Mason Jars »
14.5K shares