Buttery brioche is rolled with ample butter, cinnamon and sugar and formed into delicious large brioche cinnamon rolls. These rolls are served with a slathering of brown butter cream cheese frosting for the most delicious cinnamon rolls you've ever tasted.

Brioche is an enriched dough which just means it's a yeast dough with added eggs, butter and milk. It is a French bread that is light and fluffy and tastes very rich due to lots of butter.

It's the perfect dough for cinnamon rolls with the buttery dough complementing the cinnamon butter filling.

How to proof your yeast and make the dough

To start the brioche cinnamon rolls, you will begin to "proof" your yeast. This simply means that you are making sure the yeast is alive before combining it with the other ingredients.

To do this, warm some milk in the microwave or on the stove until it reads 100- 110 degrees. Add the milk and 1 teaspoon of sugar to the bowl of a stand mixer and sprinkle the yeast over top. Stir it into the milk and let it stand for about 5 minutes until it is foamy.

The foam tells you that your yeast is good and you can proceed with the recipe. If for some reason the yeast didn't foam then you would want to start over with new yeast. This would happen due to the milk being too hot or the yeast being too old.

From here, the rest is really simple. You will mix in your eggs, vanilla, flour, sugar and salt to the yeast mixture and then let the mixer do the magic. Mix on low for about 5 minutes until the dough is smooth.

Next, you'll add in the very room temperature butter a tablespoon at a time, letting each tablespoon of butter incorporate fully before adding the next. Then mix for another 4-5 minutes until the dough is sticky but smooth and shiny. You'll grease another bowl with baking spray and then transfer the sticky and wet dough into the new bowl.

Cover this bowl with plastic wrap and let rise in a warm place for an hour to an hour and a half until it's doubled. If your kitchen is cool, you can turn on your oven and set the bowl near the oven for a warmer environment.

While brioche can seem intimidating, it's not as hard as it seems! Follow the tips below for an approachable way to make the brioche for these brioche cinnamon rolls.

How to assemble the cinnamon rolls

Once the dough has doubled in size, you will dump it out onto a lightly floured counter and roll it out to a 12 x 18 inch rectangle. Next, you'll spread the cinnamon, butter and sugar paste onto the dough. Spread it all the way to the edges except for one long edge where you'll leave a ½ inch border.

Starting at the long edge without the border, roll the dough into a tight log, pressing the seam together at the end. Cut about a half-inch off each end so that each roll will be perfectly even and have the same amount of filling.

Cut the roll into 12 even rolls. I like to cut once in the middle of the roll and then cut each of those halves in half. You'll then have 4 halves. Cut each into 3 rolls.

For a super easy trick to cutting these brioche cinnamon rolls, use unflavored dental floss. Slide a length of dental floss under the log and then pull the 2 ends to criss-cross over the top of the rolls, pulling tight to make a cut. Using dental floss keeps the rolls from collapsing under the knife and makes clean cuts.

Place the rolls in a 9 x 13 pan coated with cooking spray and let them rise in a warm place for about an hour until they are puffy and mostly touching in the pan. Now you get to bake them, cool them slightly and slather them with a healthy dose of brown butter cream cheese frosting!

How to make overnight cinnamon rolls

If this is too much of a project to tackle in one day or you'd like those brioche cinnamon rolls to be baked fresh the morning of serving, follow these steps to make them overnight.

What is browned butter?

Doing this adds a rich, nutty flavor to the butter that is pure heaven. It's a one-of-a-kind taste and worth the extra few minutes to make.

How to make browned butter

While making browned butter is no more than melting butter on the stovetop, there are a few tips to ensure it turns out perfectly.

First, cube the butter into tablespoon pieces and place it in a light-colored saucepan. Cutting the butter into the same size cubes makes it melt faster and more evenly. The lighter color of the saucepan will help you see the browned bits on the bottom.

On medium heat, melt the butter. This should take around 2-3 minutes to completely melt the butter and start to boil it. At this point, your mixture will look like the picture below: bubbling and very slightly foamy.

It will then start to bubble even more rapidly before turning foamy.

Stir frequently during this process so that it cooks evenly and doesn't burn. When it turns foamy, just quickly stir the spoon so that you can see the color through the foam.

You want to take it off the heat once it turns an amber golden brown color. Scrap up any brown bits from the bottom of the pan as those contain lots of flavor!

At this point, you'll put your brown butter into the refrigerator to chill until it's a solid again. This will probably take an hour, so plan accordingly. Complete this step first before starting the brown butter cream cheese frosting.

Can I use instant or rapid-rise yeast?

Yes, if you only have instant yeast, just skip the proofing part of the recipe and add the same amount of yeast to the dry ingredients of the dough. Continue with the recipe as written. The milk still needs to be warmed as in the recipe so make sure not to skip that step.

Can I freeze these?

Yes! There are two ways you can do this.
1. You can bake the brioche cinnamon rolls, cool them and freeze them either individually by wrapping them in plastic wrap and foil or wrapping the whole pan in plastic wrap and foil before freezing. You’ll want to thaw them in the refrigerator overnight and then heat them up in the microwave before eating.
2. You can make the rolls through cutting them and placing them in the pan. Instead of letting them rise and then baking them, wrap the pan tightly in plastic wrap and foil and freeze. The day before you want to bake them, let them thaw overnight in the fridge. The day you bake them, remove the thawed rolls from the fridge and let rise in a warm place until about doubled in size, about an hour. Then bake as directed. They should last about 1 month in the freezer this way.

Do I have to brown the butter?

No, but I highly recommend it! It only takes 5 more minutes of your time to brown the butter (plus chilling it back to a solid) and the flavor of brown butter is really unique and so delicious. If you prefer to make a traditional cream cheese frosting for these brioche cinnamon rolls, just use softened butter and combine that with the softened cream cheese before adding the powdered sugar and vanilla.

Can you make brioche by hand?

While it's much easier to use a stand mixer with a dough hook, you can make the dough by hand-just be prepared for a work out! Proceed with the recipe as written using a wooden spoon to stir it and your hands to knead the dough. The kneading times will increase when making it by hand.
Once it's time to add the butter, make sure the butter is very soft. A bench scraper like this one or a dough scraper like this one can come in handy to help incorporate the butter into the dough as it gets really sticky.

How to store the rolls

After baking, you'll want to cool your apple cinnamon rolls some before spreading on the frosting so it doesn't completely melt. If you aren't eating all of these in one sitting, they will keep for multiple days.

Because of the brown butter cream cheese frosting, these should be stored in the refrigerator in an airtight container for up to 6-7 days.

They will start to dry out toward the end of this time frame but I found that placing them in the microwave for 20-30 seconds helped a lot!

For more brioche recipes, check out: 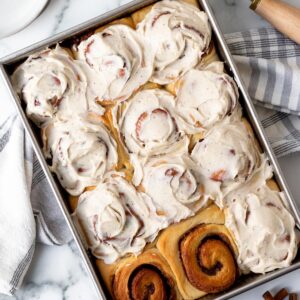 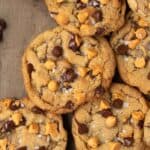