Fall flavors abound in this swirly apple cinnamon babka. A rich brioche dough is slathered in apple butter and cinnamon sugar and then is rolled, sliced and braided into this beautiful babka. Read on for in-depth steps on how to perfect a homemade babka!

Making your own homemade brioche for a babka can seem like an insurmountable task if you aren't used to making yeasted breads. Have no fear as I break down the steps needed to create this rich dough and then envelop it in apple butter and cinnamon sugar.

If you've been around here before, you know I love me some babka. In fact, one of the most popular recipes on my site is this blueberry cream cheese babka.

Apple and cinnamon are the perfect fall flavor combination and the use of store-bought apple butter not only makes this babka even easier but packs a punch of sweet apple flavor.

How to "proof" yeast

To start this recipe, you will begin to “proof” your yeast which simply means that you are making sure the yeast is alive before combining it with the other ingredients.

To do this, you’ll warm some milk in the microwave or on the stove until it reads 100-110 degrees. Then you’ll add this warmed milk and 1 teaspoon of sugar to the bowl of a stand mixer and sprinkle the yeast over the top.

Stir it into the milk and then let it stand for about 5 minutes until it is foamy at the top. This tells you that your yeast is good and you can proceed with the recipe.

If for some reason the yeast didn’t foam (milk too hot, old yeast, etc) then you would want to start over with new yeast.

From here, the rest is really simple. You will mix in your eggs, vanilla, flour, sugar and salt to the yeast mixture and then let the mixer do the magic.

Grease another bowl with baking spray and then transfer the sticky and wet dough into the new bowl. Cover the bowl with plastic wrap and let rise in a warm place for an hour to an hour and a half until it’s doubled in size.

How to shape babka

Starting with a long edge, tightly roll the dough into a long log, pinching the seam slightly to seal the edge. Using a sharp knife, slice in half lengthwise. Last, twist the 2 halves around each other creating your final babka dough.

Transfer each babka to a loaf pan lined with parchment paper squishing it at the ends to fit if needed. The dough will need another hour to do a second rise.

Can you make babka dough in advance?

If you would prefer to tackle the apple cinnamon babka over two days, here is the method for that.

Make the babka dough as described above. Instead of letting the dough rise for 1-1.5 hours in a warm place, transfer the covered bowl of dough to the refrigerator overnight.

It will rise overnight in the fridge and then you can proceed with the shaping and assembling steps. You will still let it do the second rise in the loaf pan before baking.

Can you freeze babka?

When the babka has cooled, wrap it in a layer of plastic wrap, a layer of foil and then place it in a zip-top bag and freeze it. It will last for 1-2 months in the freezer.

Place it in the refrigerator the night before you will want to serve it to allow it to defrost. The babka slices are delicious toasted in a toaster or warmed in a microwave.

The babka will last tightly wrapped for about 3 days on the counter or longer if refrigerated.

For more recipes with brioche dough, including other babkas, check out: 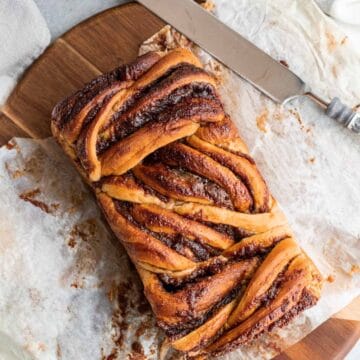