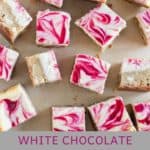 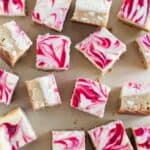 I love a good cheesecake but they can be a bit time consuming and finicky. Don't get me wrong; full cheesecakes have their place in this world (evidenced by my lemon blueberry cheesecake and my raspberry brownie cheesecake) and are the perfect dessert to impress and spoil those you love but sometimes ain't nobody got time for that.

Cheesecake bars are just the opposite. You whip up a filling rather quickly, pour it over your crust of choice and then throw it in the oven. No water bath with foil salvage ring, no cracking or sinking. But, I like to be extra. So why not throw that raspberry cheesecake bar filling over a decadent white chocolate blondie? Well that's exactly what I did and I'm here to tell you to make these asap. They make an awesome presentation with the pretty swirl of raspberry, are nice and portable and don't require utensils to eat.

How to make the raspberry puree

I recommend starting with the raspberry puree so that it can cool while you make the other components. Start by adding raspberries, sugar and water to a small saucepan over medium heat. You will bring this to a boil while squishing the raspberries with the back of the spoon to break them down. Once this starts to boil, you will add in a cornstarch slurry which is just a little water and a little cornstarch stirred together. This will thicken the mixture. Add the slurry and then reduce the heat to medium and simmer for about 3 minutes while stirring constantly until the raspberry puree begins to thicken. It should coat the back of a spoon as you stir it.

Remove it from the heat once it has thickened and press it through a fine mesh sieve to get rid of the berry seeds. You don't have to do this step if you don't have a sieve or aren't bothered by berry seeds, but I really prefer the smooth consistency of no seeds in the puree. Place the puree in the refrigerator to allow it to cool while you start the other components.

How to make the white chocolate blondie

Now we will start with the blondie base. Blondies are simply brownies without chocolate. You'll need the following ingredients for the blondies:

First, prepare a 9 x 9 baking pan with parchment paper with an overhang on at least 2 sides and preheat the oven to 350 degrees. You'll combine the melted butter and brown sugar in a medium bowl and then add eggs and vanilla. In a separate bowl, combine flour, baking powder and salt and then stir this into the butter and sugar mixture until just combined. It will be a thick batter. Last, fold in the white chocolate chips and spread into your prepared pan, smoothing the top. Bake this until golden brown and a toothpick inserted into the middle comes out clean, about 25-28 minutes. Don't overbake!! Let the blondie cool while you make the filling.

How to make the cheesecake filling

You can use a stand mixer or a hand mixer for this step. If using a stand mixer, use the paddle attachment so that you don't whip too much air into the filling which can cause cracking or sinking.

Start by mixing together the softened cream cheese and sugar until creamy and incorporated, about 1 minute. Next add the eggs, one at a time, mixing for about 30 seconds each time. Then add the vanilla. Last, you will add 1 tablespoon of flour which helps provide some stability to the cheesecake filling so that it won't sink. Mix the flour until fully incorporated. You may see little lumps after this step but you won't notice it in the final product so don't worry about it.

That's it! Pour the filling over the cooled blondie and then dollop the raspberry puree over the top of the filling. Use a knife to swirl the puree into the cheesecake mixture. Now, you are ready to bake it. Bake the raspberry cheesecake bars for about 36-40 minutes. You'll want the edges to be fully set and just barely starting to brown and the center to be slightly jiggly. It will fully set up while cooling and refrigerating. Let it cool on a wire rack for about 30 minutes and then place in the refrigerator to cool for 2-3 hours before serving. They can also chill overnight.

How to store the cheesecake bars

The bars will keep in the refrigerator for 3-4 days. They do need to be stored in the refrigerator due to the cheesecake filling. Wrap the pan in foil or place the blondies in an airtight container ideally pushed together if they were cut to keep the blondie from drying out. These didn't last very long in my household so you may not need to worry about it :-).

If you like this recipe, you may enjoy these: 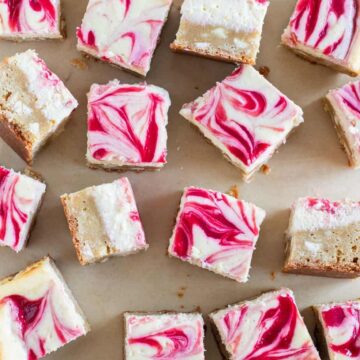 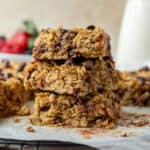 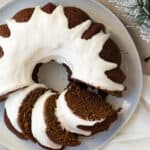 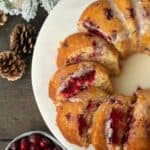 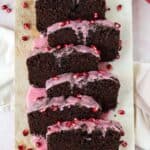 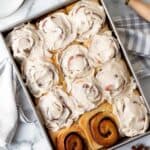 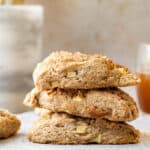