This raspberry brownie cheesecake couldn't be tastier or more simple. Raspberry and chocolate are a classic combination. Here we've combined the convenience of a boxed brownie mix with a delicious raspberry cheesecake filling! This cheesecake is a gorgeous showstopper!

Cheesecake can be one of those desserts that intimidate people. I'm here to wipe away those fears of a failed dessert and provide lots of tips and tricks for the perfect baked cheesecake. Cheesecakes are a bit more time-consuming than some of your other desserts but the payoff is so worth it.

I love a decadent and sweet cheesecake as much as the next person but it is sometimes nice to balance a lot of sweetness out with some tart fruit so you are not overwhelmed by sugar.

I did contemplate making a homemade brownie layer, but let's be honest, boxed brownies are pretty darn good and require less effort. Thank you Ghirardelli for your delicious boxed brownies.

There is a nice and subtle raspberry flavor throughout the cheesecake layer and a pale pink color to it. If you are looking for a deeper pink, feel free to add a couple drops of red food coloring to make it a brighter pink color.

How to make the cheesecake

The first step to this raspberry brownie cheesecake is to make your boxed brownies according to the box directions. You will pour the brownie batter into a 9 or 10 inch springform pan and bake according to the directions for a 9 x 9 pan.

I actually did this step the night before and covered the pan with foil overnight before proceeding with the cheesecake portion. This can certainly be made in one day though.

Next, you will make the raspberry puree. Combine raspberries, sugar and water in a saucepan and using a spoon, crush some of the berries to release their juice. You'll simmer this mixture for about 5 minutes and then puree it in a blender or food processor until smooth.

I do not like the seeds in my puree so I suggest pressing the puree through a fine-mesh strainer to get rid of the seeds. Let this cool while you make the cheesecake filling.

For the filling, you will take softened cream cheese, sugar and salt and mix until smooth using an electric mixer or stand mixer. Then go in the eggs until combined. You'll add ¾ cup of the raspberry puree along with some vanilla extract and mix until there are no streaks left.

Finally, add a little heavy whipping cream to add some lightness to the filling. This gets poured over the cooled brownie layer. That wasn't too hard right?! You'll pop the pan into a water bath and cook until the edges are set and the middle is just a little jiggly.

I chose to decorate the raspberry cheesecake with extra raspberries and served it with some of the puree that was leftover.

How to prevent cracks in the top of the cheesecake

I think one of the intimidating things about cheesecake is that people have made them before only to have a huge crack appear in the top of the cake. While the flavor is still the same, unless you have a topping to put over the cake, that crack can be unsightly.

The best way to make sure you don't have a cracked cheesecake is to cook it in a water bath. Cracks appear in cheesecakes due to it cooking too fast or cooling too fast.

A water bath will add more moisture to the oven while cooking and allows more even heat to cook the cheesecake. They are simple to do and I highly recommend cooking this cheesecake using the water bath method.

How to make a water bath for cheesecakes

You simply take 2 pieces of heavy-duty foil and place your springform pan on top of them. Then you'll carefully wrap the foil around the edge of the pan until it is about ¾ up the side of the pan. Make sure that there are no holes in the foil to allow water to seep through and get the cheesecake wet!

If you don't have heavy-duty foil, I would recommend using 3 layers of regular foil. Then, you'll place your cheesecake pan in a larger roasting pan in the oven. You'll pour hot water into the roasting pan being careful to not get it past the foil surrounding the pan.

I recommend pouring the water into the pan after it's already in the oven so you don't slosh it around by moving it from your counter to the oven. See the pictures below for an easy tutorial.

How to store a cheesecake

This raspberry brownie cheesecake can be placed in the refrigerator for 3-4 days tightly wrapped. If you need your cheesecake at a later date and wanted to get a head start on making it, you can also make the entire cheesecake and then freeze it.

Cool the cheesecake completely and remove it from the springform pan placing it on a cardboard round. Freeze the cheesecake for about an hour uncovered first so that it is cold enough to wrap tightly without squishing it.

After an hour or so, remove the cheesecake and wrap it tightly in plastic wrap and then in foil. It should last for about 1 to 2 months like this.

To thaw it out, place the cheesecake into the refrigerator the night before you will need to serve it. You can also slice the cake prior to freezing it and freeze individual slices of cheesecake, wrapped in the same way as a whole one.

Other tips for baking cheesecakes

For more cheesecake recipes, check out: 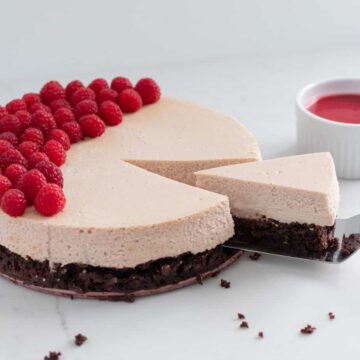