How to make fudgy brownies

This is not a cakey brownie recipe! Fudgy brownies are more my thing. Luckily, these peanut butter cup brownies are easy, require no mixer and can even be made in one bowl.

To start, I line my brownie pan with parchment paper leaving an overhang on 2 sides. This helps to easily remove the brownies from the pan and create clean slices.

If you spray the pan with cooking spray first the parchment won't slide around. I have a set of metal binder clips that I use to clip the parchment onto the pan on the two long sides so the parchment stays as well.

Next, melt unsalted butter and chopped bittersweet chocolate in a small saucepan. Do this over low heat and stir it frequently to make sure the chocolate doesn't burn.

If you don't want to use the stove, you could do this in the microwave too. Melt the chocolate and butter together in 30 seconds increments, stirring each time until it's melted. Be careful though as chocolate can scorch quickly in the microwave.

Add the sugar to the chocolate and butter mixture and stir well. Then the eggs one at a time and mix well. Next comes the cocoa powder, flour and salt. Stir until it's just barely incorporated.

Last, half of the chopped peanut butter cups get added to the batter until they are evenly incorporated.

How to layer the peanut butter filling

The mixture is really thick and you'll need to mix it by pressing a spoon or spatula into the mixture and smushing down repeatedly to get it mixed thoroughly. It's almost a cookie dough consistency.

Once mixed, dump out the crumbly mixture onto a sheet of parchment paper. Use a rolling pin to roll the peanut butter filling out into a flat 8 inch by 8 inch square.

Finish off the brownies with the rest of the chopped peanut butter cups and they are ready to bake!

Tips for the best brownies

While brownies are pretty easy to make and tough to mess up, there are a few tips to ensure you make the best peanut butter cup brownies ever.

How to store the brownies

Store any leftover brownies in an airtight container. They will last for 3-4 days stored on the counter or a couple more days if refrigerated. The pretzels will lose their crunch a bit after a couple of days but the brownies still taste delicious!

If you will have a lot of leftover brownies, consider only cutting the ones you need and leaving the rest as a slab of brownies.

Can you freeze the brownies?

You can also freeze these peanut butter cup brownies if needed. Wrap the brownies tightly in plastic wrap and then in foil.

For extra security, place them into a zip-top plastic bag. They will last for a couple of months stored this way. Defrost them in the refrigerator overnight.

Check out these other bar recipes: 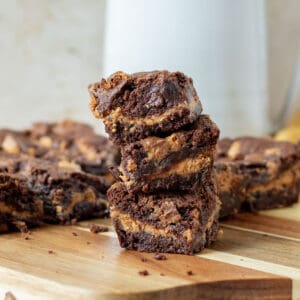