When you need a cheesecake but don't want the hassle of making one from scratch, choose this vibrant red velvet no-bake cheesecake! With an oreo crust and that signature red velvet taste with a touch of cocoa, this recipe is super simple. It's creamy, tangy and rich but still light. All the flavor but none of the hassle!

What is the difference between a baked and no-bake cheesecake?

While baked cheesecakes have their place in any home baker's repertoire, they are labor intensive and can sometimes be finicky. Water baths, cracks, knowing when they are done, and slowly cooling them are some of the roadblocks you may encounter.

While going through all those hassles is totally worth it for that smooth, creamy and rich finale of a classic cheesecake, sometimes we (I) just don't have time for that. Enter the no-bake cheesecake.

Regular cheesecakes are thickened and held together by eggs in the batter while a no-bake cheesecake is thickened with the addition of freshly whipped cream. Both require refrigeration for quite some time to really chill properly but you get to skip the hour-plus baking time and guesswork wondering if it's done with a traditional cheesecake.

The crust is also not baked in no-bake cheesecakes. More butter is used to "glue" the crumbs together while pressing them tightly into the pan. Refrigerating the crust before filling it, prevents a crumbly mess.

How to make a no-bake cheesecake

No-bake cheesecakes start the same as a traditional cheesecake by making the crust. As stated above, there is no need to bake the crust prior to filling it but it's a good idea to refrigerate it while making the filling.

Here is where we depart from a baked cheesecake. Instead of adding eggs, you'll add the rest of the cheesecake ingredients-usually your flavorings, sour cream for a bit more tang and creaminess and some vanilla.

The last step is whipping heavy cream to stiff peaks. Whipped cream is folded into the cream cheese mixture creating a final light and airy but extremely creamy texture.

Tips for the perfect no-bake cheesecake

While there are not the myriad of ways to mess up this no-bake cheesecake like there are with traditional cheesecakes, there are still a few things to keep in mind for the best outcome.

How to release it from the pan

You'll use a springform pan for this cheesecake. The crust is only on the bottom of the pan and not the sides for an easier release. When you are ready to serve the cheesecake, just slide a sharp knife around the edge of the pan to release the cheesecake from the sides.

Then you can release the spring and remove the outer ring. If you want to slide if off the bottom of the springform base, you can carefully run a knife between the pan and crust to loosen it up and then slide a large spatula underneath until you feel it release from the bottom. Carefully slide it off onto a serving plate/stand.

The cheesecake will last for a good 5 days stored in the refrigerator tightly covered. Good luck with leftovers lasting that long!

Can you freeze a no-bake cheesecake?

The cheesecake can be frozen for later. Let it chill thoroughly first if you don't want to freeze it in the pan.

After chilling, place the cheesecake on a freezer safe plate and wrap it in plastic wrap and then foil tightly. Freeze for 1-2 months. To thaw the cheesecake, just place it in the refrigerator overnight or at least a few hours before serving.

You can also freeze individual slices. Follow the same procedure above.

For more easy desserts, check out: 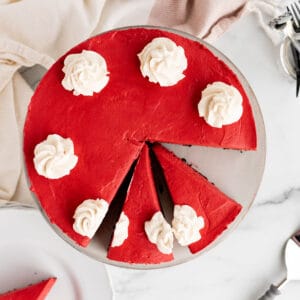