I have to admit that I'm in love with this chocolate cupcake recipe. It's wonderful in cake pans or in cupcake form. It's also super simple to throw together.

This frosting uses two methods of infusing raspberry flavor into the buttercream. You first make a traditional American buttercream with butter and powdered sugar.

Then, you add store-bought seedless raspberry preserves. There's no pureeing raspberries and then straining them to get the pesky little seeds out! The raspberry preserves turn the buttercream a pretty pale pink color and give a hint of raspberry flavor.

Chocolate with raspberry is one of my favorite chocolate pairings!

Tips for the best chocolate cupcakes

Does the caffeine in the hot coffee bake out of the cupcakes?

Unlike baking with alcohol where most of the alcohol bakes out, caffeine does not. That said, there is only about ½ oz of coffee in each cupcake.

Can you taste the coffee in the cupcakes?

The coffee is used to enhance the chocolate flavor and not to bring the taste of coffee into the cupcakes so you won't even taste it.

What can I substitute for the hot coffee?

If you are sensitive to caffeine or may be serving these to toddlers who already seem as if they are running on 20 cups of coffee a day, you can substitute hot water instead of hot coffee.

How do you store the cupcakes?

How long do the cupcakes last?

If stored in the refrigerator in a tightly covered container, these cupcakes should last 2-3 days. After that, they will start to dry out.

How do you serve the cupcakes?

If the cupcakes have been refrigerated, remove them from the refrigerator for about 30 minutes prior to serving to allow the buttercream to come to room temperature.

I hope you enjoy these simple chocolate raspberry cupcakes and have a new go to chocolate cupcake recipe to add to your recipes! 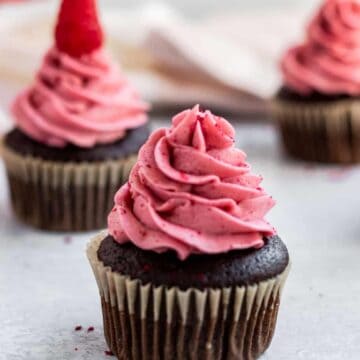