These apple pie cupcakes are a perfectly spiced vanilla cupcake filled with a delicious caramelized apple pie filling and then topped with silky cinnamon buttercream and a dollop of apple pie filling. The perfect handheld fall treat and a lot easier than a full apple pie!

These apple pie cupcakes start with a fragrant blend of spices you would typically find in apple pies plus a couple others. Cinnamon, allspice, and nutmeg are the usual suspects when a little cardamom and ginger added for more depth of flavor.

This is a simple cupcake recipe that starts with creaming butter and sugar together, adding an egg and then alternating the wet and dry ingredients to complete the batter.

Why alternate wet and dry ingredients?

How to easily fill the cupcake pan

This recipe will make 12 cupcakes so it’s fairly easy to evenly divide the batter between each cupcake. If you find that you didn’t have enough at the end, simply scoop some of the batter out of the cups that seem more full than others.

For the filling for the apple pie cupcakes, diced apples into a small dice. About ¼ inch pieces are good. A smaller dice is best so that you have lots of little pieces of apple in each cupcake.

Dicing the apples is the most time-consuming part of the the filling. The rest of the filling is butter, brown sugar, a little lemon juice and some salt brought to a simmer and cooked until the apples soften.

To make sure the apple filling isn't too runny, add cornstarch mixed with a little water to the pan and let the mixture come to a boil for a couple minutes until thickened.

Let the apple pie filling cool before adding it to the cupcakes!

If you don’t have a cupcake corer, don’t worry! You can do this with a knife as well. Remember not to cut all the way through the cupcake to the bottom or you will have filling spilling out.

Use a small spoon to fill each cupcake hole with the apple filling. Fill it all the way to the top, patting the apples down with the back of the spoon as needed.

The cinnamon buttercream is a traditional american buttercream flavored with vanilla and cinnamon. It's the easiest type of buttercream to make and completely foolproof.

You can adjust the amount of milk you add to make thicker or thinner buttercream.

I like to pipe my buttercream on using a piping bag and a decorating tip like one in this set. I used the large open round tip and applied pressure down while squeezing the buttercream out to create the mound of frosting.

If you don't have a piping bag or decorating tips, just put the frosting in a plastic bag and push it all toward one corner. Squeeze the air out of the bag and twist it right above where the frosting ends to keep it from coming out the top. Then just snip a small triangle off the corner of the bag and use that to pipe on the buttercream.

After frosting the cupcakes, I used a small offset spatula (you can just use a knife or the back of a spoon) to create a small well in the top of the frosting and then added an additional small dollop of apple pie filling.

These are best kept in an airtight container in the refrigerator and should last 4-5 days if tightly covered. Because the frosting is a buttercream, when refrigerating, the butter will harden slightly. Allow to sit for 10-20 minutes after refrigerating before serving for the best texture. 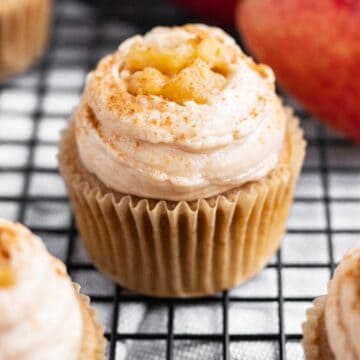